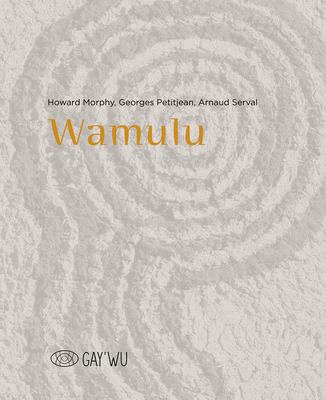 By Georges Petitjean (Text by (Art/Photo Books)), Berengere Primat (As Told by), Arnaud Serval (As Told by)


Special Order—Subject to Availability
- The second book in the Gay'wu Aboriginal Arts and Knowledge series, following on from the success of Anangu Collective, ISBN 9788874399611 - Published to accompany an exhibition at the Fondation Opale in Lens, Crans Montana (Switzerland), from June 12 to November 6th This second book in the Aboriginal Arts and Knowledge series documents a body of work created cooperatively by 4 artists: Ted Egan Tjangala, Dinny Nolan Tjampitjinpa, Johnny Possum Tjapaltjarri and Albie Morris Tjampitjinpa. Wamulu, a yellow flower, has traditionally been used during ritual ceremonies in the western desert of Australia. The wamulu flower is gathered, dried, cut up, and mixed with ochre and binders before being applied to the ground. This catalog for an exhibition at the Fondation Opale showcases an exceptional project that took place near Alice Springs between 2002 and 2005, where this collective of artists used paint made from the wamulu flower, which is most often associated with impermanence, to create contemporary and permanent works of art. At the same time, they honored the traditional Aboriginal process of communal performance, participation, and song that emphasizes the link between the present and the past. Includes an interview with the noted Aboriginal art expert Arnaud Serval, who facilitated the work of the collective. Text in English and French.
Georges Petitjean is an art historian, writer, and curator at the Fondation Opale, in Lens (Switzerland). Arnaud Serval is a gallerist who specializes in Aboriginal art, and has immersed himself in Aboriginal culture for the past two decades.