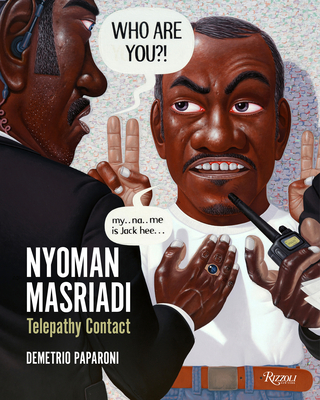 
Special Order—Subject to Availability
The work of Nyoman Masriadi, one of the leading Indonesian contemporary artists from the post-Suharto era.

This stunning volume comprehensively tackles Nyoman Masriadi's artistic universe, which is considered to be among those that have most strongly impacted the definition of the new art of Southeast Asia. He is Southeast Asia's most well-received contemporary artist at auctions, and the first living Southeast Asian artist whose work has topped $1 million at auction.

Masriadi's paintings frequently depict superhuman figures whose narratives, while rooted in Indonesian cultural history, offer witty and often biting social commentary on contemporary life and global pop culture. Through his expert control of light, shadow, and volume, Masriadi endows the monumental characters of his works with a sculptural, almost three-dimensional presence. Sometimes these characters appear in the archetypal roles of comic-book heroes, cowboys, soldiers, and athletes; but just as frequently, they are simply powerfully built people engaged in solitary acts of strength or captured in private moments of vulnerability.
Demetrio Paparoni is an art critic, curator, and essayist. He has written and edited numerous books and monographs, including Chuck Close (2002) and--revealing the contemporary Asian world--on Wang Guangyi (2013), Natee Utarit (2017), and Ronald Ventura (2018).