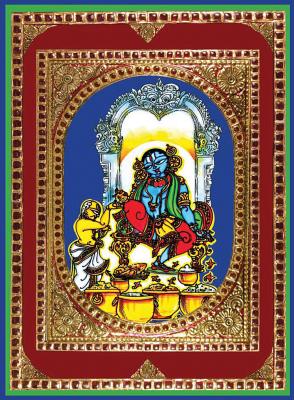 
Special Order—Subject to Availability
(This book cannot be returned.)
The ritual of offering food or Naivedyam to Lord Venkateshwara - a manifestation of Lord Vishnu - at the Tirumala Temple has existed since time immemorial, when Lord Vishnu decided to descend on Earth in the 'archa' form, or as an idol that can be worshipped. He commissioned Sage Vaikhanasa to prepare the ancient religious text Agama Shastra, which gives an elaborate description of the rituals to be conducted at the Tirumala Temple, the ingredients to be used to prepare prasadams, procedures for a priest to follow, precautions to be taken, and the Veda mantras to be recited at each step. With rare photographs and detailed step-by-step recipes, the book describes the various kinds of food offerings made, with specifications about the quantity, ingredients, preparation, variety of food, and particular times when they should be served. This sacred volume is a must-have for every Lord Venkateshwara devotee.
AV Ramana Dikshitulu is the 37th descendent of Vaikhanasa Archaka Gopinath and the head priest at the lord Venkateshwara temple at tirumala, Andhra Pradesh. He holds a doctorate in molecular biology and is an inimitable authority on the Agamas, the crucially important Vedic scriptures. Kota Neelima has been a political journalist for over twenty years. She is former political editor at The Sunday Guardian, focussing on politics, democratic reforms, and issues concerning rural poor in India. Her recent publications include Tirupati: A Guide to Life (2012), Shoes of the Dead (2013), and The Honest Season (2016)