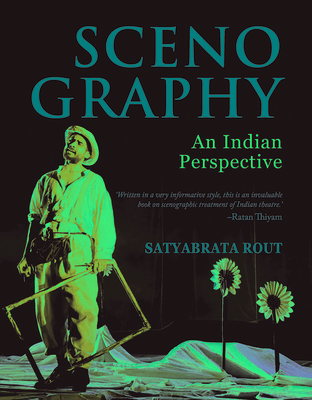 
Special Order—Subject to Availability
(This book cannot be returned.)
- This is the first ever book on scenography in an Indian context - The book delves deep into the art of theater-making, backstage actions, pre-stage plans and pre-production visuals - Traces the journey of Indian theater in respect of that of the West. It focuses how the approaches differ from each other and how scenography got gradually appropriated in an Indian context - More than 250 high-res, colored photographs along with diagrams - There are interviews with leading theater practitioners across India at the end of the book Scenography is the art of 'writing the stage space' -- a visual journey of unmaking and remaking the text on a theatre space, a language of the spectatorial senses. However, this dialect of space and props, though prevalent in the West from the early days of the Greek plays, unfortunately has never been groomed and appropriated in the long theatre tradition of the Orient -- until a bunch of new practitioners and scholars decided to explore the field of design and change the narrative of space in recent times. Yet with hardly any documentation available in the backdrop of indigenous theatre, there was a need of a practical treatise for quite a long time. Scenography: An Indian Perspective unearths this astonishing yet silent contribution of 'stage' design in Indian theaters throughout the ages and the comparatively recent appropriation of it.
Dr Satyabrata Rout is a noted scenographer and director of contemporary Indian theater. He has completed his post-graduation in design and direction from the National School of Drama, New Delhi in 1983, and thereafter was associated with various institutions and organizations like Rangmandal, Bharat Bhavan, Bhopal, Theatre-in-Education Company, NSD Extension Program, etc. Satyabrata is one of the pioneers in conceptualizing 'Visual Theatre' in India, and has designed and directed more than 75 plays of international repute.