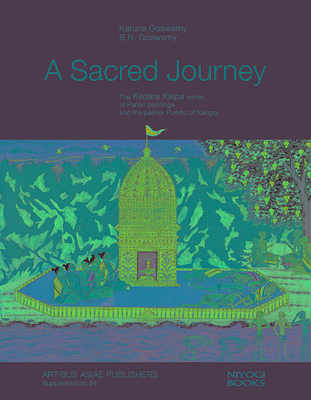 By Karuna Goswamy, B. N. Goswamy


Special Order—Subject to Availability
(This book cannot be returned.)
- An in-depth analysis of an exquisite series of 19th-century Pahari paintings that depict the journey of five pilgrims to the land of Lord Shiva - The book features detailed descriptions of the paintings, their subtle nuances and spiritual significance - Includes over 170 magnificent images of the Kedara Kalpa series of paintings from leading museums and collections around the world The Kedara Kalpa is a relatively little-known Shaiva text; and only slightly better known than it are the two dispersed series of paintings to which this study is devoted. But both raise questions that are at once elegant and deeply engaging. Ostensibly, they treat of a journey by five seekers who set out to reach the realm of the great god, Shiva - walking barefoot through icy mountains and deep ravines, frozen rivers and moon-like rocks, running on the way into temptations and dangers the like of which no man before them had encountered - and, in the end, succeed. But as one goes through the narrative, the text visualised with brilliance sometimes by members of a talented family of Pahari painters, one begins to wonder. Is this a parable of sorts? Or the description of a long, unending dream from which one never wakes? Or, one wakes up like those five seekers and then, at the very next moment, slips back into that real / unreal world again? Is there something that hides behind all that one sees? Is this journey real, or is it only in the mind? It is for each reader to decide, the authors appear to say.
Eminent historian of Indian culture, and formerly Professor of History at the Panjab University, Chandigarh, Karuna Goswamy had very distinguished writing to her credit. beginning with her doctoral dissertation. The present volume on the Kedara Kalpa series of paintings is based on her research and her identification, for the first time, of the ancient text on which the paintings are based. B.N. Goswamy, a distinguished art historian is Professor Emeritus of Art History at Panjab University, Chandigarh. His work covers a wide range of subjects, and is regarded, especially in the area of Indian painting, as having influenced most thinking. He has been the recipient of many honours, including the Jawaharlal Nehru Fellowship, the Rietberg Award for Outstanding Research in Art History, the JDR III Fellowship, the Mellon Senior Fellowship and, from the President of India, Padma Shri (1998) and Padma Bhushan (2008). Apart from Panjab University, Professor Goswamy has taught, as Visiting Professor, in major universities across the world, and has been responsible for significant exhibitions of Indian art at international venues. He is the author of over 25 books on Indian art and culture, including Pahari Painting: The Family as the Basis of Style (1968); Painters at the Sikh Court: A Study Based on Twenty Documents (1975); A Place Apart: Paintings from Kutch (1983); The Essence of Indian Art (1986); Wonders of a Golden Age: Painting at the Courts of the Great Mughals (1987); Pahari Masters: Court Painters of Northern India (with E. Fischer, 1992); Indian Costumes in the Calico Museum of Textiles (1993); Nainsukh of Guler: A great Indian Painter from a small Hill State (1997); Domains of Wonder: Selected Masterworks of Indian Painting (with C. Smith, 2005); and, more recently, The Spirit of Indian Painting: Close Encounters with 100 Great Works (2014, 2016) and Pahari Paintings: The Horst Metzger Collection in the Museum Rietberg (with E. Fischer, 2018).