My Heart: A Novel of Love (Paperback) 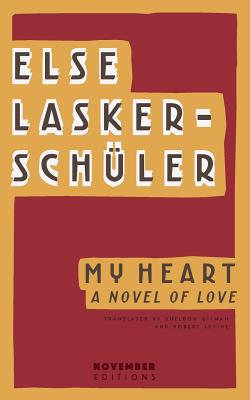 My Heart: A Novel of Love (Paperback)


Not On Our Shelves—Ships in 1-5 Days
(This book cannot be returned.)
'I am wildly in love with someone, but I'll say no more about it. That way it could always be .. you.' Set around the Caf des Westens, the epicenter of early twentieth century Expressionist Berlin, Else Lasker-Sch ler chronicles the demise of her marriage in a series of letters to her husband Herwarth Walden, publisher of the avant-garde journal Der Sturm. Assuming the guise of alter egos such as Tino of Baghad or the Prince of Thebes, she weaves a web of Oriental fantasies to inform her husband of her infidelities. In so doing, she transforms a personal crisis into a metaphor for the end of an era. Starring a host of leading artists, including Karl Kraus, Alfred D blin, Oskar Kokoschka, Karl Schmidt-Rottluff, Emil Nolde and Arnold Sch nberg, My Heart offers an unforgettable insider's glimpse into one of Berlin's most artistically vibrant and fascinating periods. This translation by Sheldon Gilman and Robert Levine - the first English-language edition to appear to date - features an introduction by Professor Jakob Hessing of the Hebrew University of Jerusalem, and a glossary of relevant names and places.