A Doorway to Heroism: A decorated German-Jewish Soldier who became an American Hero (Hardcover) 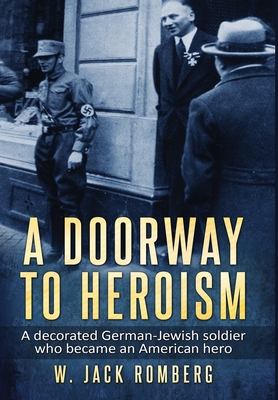 A Doorway to Heroism: A decorated German-Jewish Soldier who became an American Hero (Hardcover)

Imagine a German Jew who was a decorated German soldier in World War I, a resister in Cologne at the start of Hitler's reign of terror, and a Silver Star decorated U.S. Army soldier. Three heroic actions, at three different times, in three different places. This is the story of Richard Stern, whose photograph of his protest hangs in multiple German museums, showing a rare Jewish protest in Nazi Germany. He was my Great Uncle.

We have now passed the 75th anniversary of World War II. Most of those veterans are gone, and their stories should be preserved, especially those as unique as Richard Stern's. How many American soldiers served the opposing army in World War I, let alone as decorated German soldiers? How many German war veterans actively opposed the Nazis in the 1930s? How many Jews, after making it safely out of Germany, decided they had to get into the American army despite their age exemption to fight Nazi Germany? His actions that earned him the Silver Star got a burst of publicity in New York City.

Richard Stern's history connected to the Holocaust is unique.This book tells his full story along with how the Shoah impacted his family.