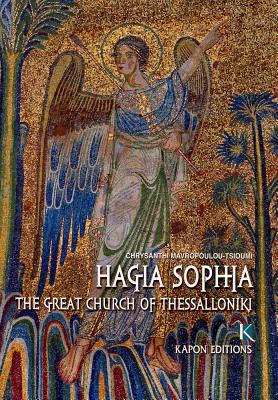 
Special Order—Subject to Availability
(This book cannot be returned.)
The thirteen-centuries-old church of Hagia Sophia, dedicated to the Holy Wisdom of God, has been the focus of scholarly interest and debate since the nineteenth century, generating a remarkably rich bibliography: Greek and foreign. However, until now there was no publication addressed to the visitors to this monument. This book comes to fill the void, examining all aspects of the subject of the history of the church, its decoration, and its reception throughout history.
Chrysanthi Mavropoulou-Tsioumi is Professor Emerita at the Aristotle University of Thessaloniki. She began her career in the Archaeological Service in 1965, with a five-year break from 1969 to 1975, during which she was a research fellow at the Patriarchal Foundation of Patristic Studies and for two years studied in Germany as scholarship-holder of the Alexander von Humboldt Foundation. In 1975, she returned to the Archaeological Service and in 1981, when responsibility for restoring the monuments of Thessaloniki after the 1978 earthquakes passed exclusively to the Ephorate of Byzantine Antiquities, she became director of the Ephorate and continued the restoration project. Her scholarly interests encompass almost all genres of Byzantine art, but particularly Byzantine painting. In 1986, she was elected Professor at the Aristotle University of Thessaloniki.