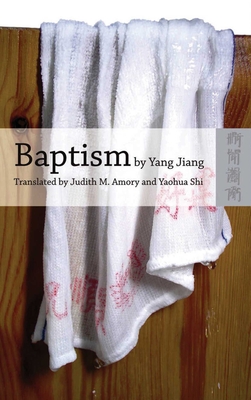 
Special Order—Subject to Availability
The characters in this vivid, witty, and engrossing novel, set in a Beijing literary institute right after the revolution, are a group of intellectuals from the old society adjusting to a new reality. There is a love story, intrigue, back-biting, and deception familiar circumstances of academic life. But in the end, all must undergo the harrowing ordeal of public confession in the first great purge of the 1950s. As each responds with subterfuge, terror, or humility, they reveal more about their souls than about their politics. Baptism has wide appeal for general readers, especially those with an interest in China. Written in a direct and fast-moving style with vivid characters and universal plot motifs, it will also be a welcome addition to university courses in modern Chinese literature or Chinese history and politics. Baptism is the only novel written by the distinguished Chinese woman playwright, essayist, and translator, Yang Jiang. Born in 1911, she has experienced the entire sweep of China’s turbulent twentieth-century history. Passages from this novel have already been quoted, in English, in books about the period. Her memoir of life during the Cultural Revolution has been translated twice and widely read.
Yang Jiang, born in 1911, is one of China’s most eminent playwrights, essayists, memoirists and translators. She studied at Oxford and the Sorbonne during the 1930s, then returned to China where for many years she was a member of the Literary Research Institute of the Chinese Academy of Social Sciences. In recent years she has published a translation of Plato’s Phaedo and a memoir of her family, We Three. Baptism is her only novel. It was published in China in 1986, when she was 75, and has been in print ever since. Judith Amory is a retired Harvard University librarian. She lives in New York and catalogs Chinese language materials for the New York Public Library and the Metropolitan Museum of Art. Yaohua Shi teaches Chinese, Chinese literature, and Chinese film at Wake Forest University and has published articles on The Dream of the Red Chamber, The Scholars, the representations of the police in recent Chinese films, and Chinese modernist architecture.
“Playwright, essayist, translator and novelist, Yang Jiang is a legend of modern Chinese literature. With a career spanning more than six decades, Yang has been known for her portraits of Chinese manners in a subtle, sophisticated style. Baptism deals wit

“An important contribution to twentieth-century Chinese literature, Baptism’s compelling story of thwarted romance and broad social conflicts set in post-Second-World-War China offers a feminist and humanist critique of the politics of possessive individu

“Set in the early years after the Communist revolution, Baptism is at once a satirical indictment of intellectuals – whose hypocrisy, pettiness, and arrogance might seem to justify the need for a political ‘cleansing’ – and a sympathetic portrait of how t