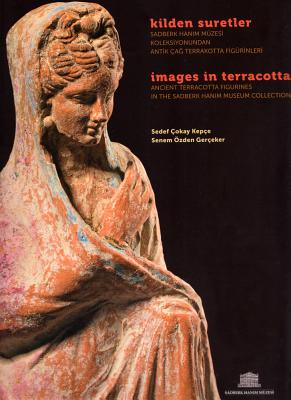 
Special Order—Subject to Availability
(This book cannot be returned.)
The "Images in Terracotta" exhibition being held on 18 November 201115 April 2012 consists of Greek and Roman period terracotta figurines in the Vehbi Koc Foundation Sadberk Hanim Museum. Production of figurines can be traced back to prehistoric times, when people began to depict sacred entities or figures they held in regard. These were made of diverse materials, depending on the period and region. In antiquity the preferred material was terracotta. The earliest examples were shaped by hand, but in later centuries moulding techniques were introduced and mass production began. The terracotta figurines dating from Greek and Roman periods that are the subject of this exhibition were principally used as votive offerings or grave gifts, as demonstrated both by ancient written sources and archaeological excavations. Figurines representing gods and goddesses predominate among those with sacred significance. In addition the exhibition includes figurines that reflect daily life in antiquity, such as mothers nursing their babies or sewing.