The Pyramids (New and Revised): The Archaeology and History of Egypt's Iconic Monuments (Hardcover) 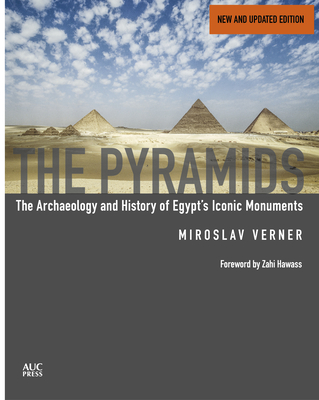 The Pyramids (New and Revised): The Archaeology and History of Egypt's Iconic Monuments (Hardcover)


Not On Our Shelves—Ships in 1-5 Days
An authoritative account by preeminent Egyptologist Miroslav Verner covering over 70 of Egypt's and Sudan's pyramids, their historical and political significance, updated in a magnificent new edition
A pyramid, as the posthumous residence of a king and the place of his eternal cult, was just a single, if dominant, part of a larger complex of structures with specific religious, economic, and administrative functions. The first royal pyramid in Egypt was built at the beginning of the Third Dynasty (ca. 2592-2544 BC) by Horus Netjerykhet, later called Djoser, while the last pyramid was the work of Ahmose I, the first king of the Eighteenth Dynasty (ca. 1539-1292 BC). Nearly two decades have passed since distinguished Egyptologist Miroslav Verner's seminal The Pyramids was first published. In that time, fresh explorations and new sophisticated technologies have contributed to ever more detailed and compelling discussions around Egypt's enigmatic and most celebrated of ancient monuments. In this newly revised and updated edition, including color photographs for the first time, Verner brings his rich erudition and long years of site experience comes to bear on all the latest discoveries and archaeological and historical aspects of over 70 of Egypt's and Sudan's pyramids in the broader context of their more than one-thousand-year-long development.
Lucidly written, with 300 illustrations, and filled with gripping insights, this comprehensive study illuminates an era that is both millennia away and vividly immediate.

Miroslav Verner is an Egyptologist, archaeologist, and epigrapher who has been working in archaeological excavation and research in Egypt since 1964, and has published thirteen academic monographs and numerous academic articles. He is the author of Temple of the World: Sanctuaries, Cults, and Mysteries of Ancient Egypt (AUC Press, 2013) and Abusir: The Story of a Royal Necropolis (AUC Press, 2016). Steven Rendall is a freelance translator from French and German with more than fifty book translations to his credit. Zahi Hawass is an Egyptian archaeologist, Egyptologist, and former Minister of State for Antiquities Affairs.