Mathematical Theory of Elasticity of Quasicrystals and Its Applications (Hardcover) 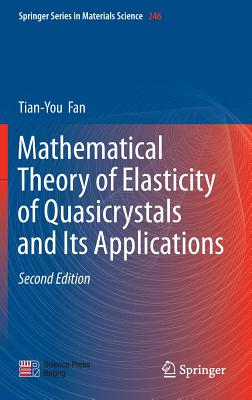 Mathematical Theory of Elasticity of Quasicrystals and Its Applications (Hardcover)

This is book number 246 in the Springer Series in Materials Science series.

This interdisciplinary work on condensed matter physics, the continuum mechanics of novel materials, and partial differential equations, discusses the mathematical theory of elasticity and hydrodynamics of quasicrystals, as well as its applications. By establishing new partial differential equations of higher order and their solutions under complicated boundary value and initial value conditions, the theories developed here dramatically simplify the solution of complex elasticity problems. Comprehensive and detailed mathematical derivations guide readers through the work. By combining theoretical analysis and experimental data, mathematical studies and practical applications, readers will gain a systematic, comprehensive and in-depth understanding of condensed matter physics, new continuum mechanics and applied mathematics.

This new edition covers the latest developments in quasicrystal studies. In particular, it pays special attention to the hydrodynamics, soft-matter quasicrystals, and the Poisson bracket method and its application in deriving hydrodynamic equations. These new sections make the book an even more useful and comprehensive reference guide for researchers working in Condensed Matter Physics, Chemistry and Materials Science.

After study in Peking University, Tianyou Fan has begun his academic career in Beijing Institute of Technology, as Assistant and Lecturer (1963-1979), Associate Professor (1980-1985) and Professor (1986-present). He was several times an Alexander von Humboldt Research Fellow at the Universities of Kaiserlautern and Stuttgart, and held Visiting Professorships at the Universities of Waterloo, Tokyo and South Carolina etc. Fan is nominated member of the 9th and 10th National Committee of the People's Political Consultative Conference (1998-2007), and working as member of the American Mathematical Society, and the Association of Applied Mathematics and Mechanics of Germany. He is the Associate Editor of Applied Mechanics, Reviews of American Society of Mechanical Engineers, Reviewer of Mathematical Reviews of American Mathematical Society. He has published several monographs, including: Foundation of Fracture Mechanics (1978, in Chinese), Introduction to the Theory of Fracture Dynamics (1990, in Chinese), Mathematical Theory of Elasticity of Quasicrystals and Its Applications 1st edition (1999 in Chinese, 2010 in English), Foundation of Fracture Theory (2003 in Chinese), Fracture Dynamics: Principle and Applications (2006, in Chinese), Mathematical Theory of Elasticity and Relevant Topics of Solid and Soft-Matter Quasicrystals (2014, in Chinese), Foundation of Defect and Fracture Theory of Solid and Soft Matter (2014, in Chinese). Recipient: the first grade prize in Science and Technology Prize of the Defense Science, Technology and Industrial Committee of China in 1999, China Book Prize in 1991, 2012, Outstanding Scientific Monograph Prize of Educational Committee of China in 1992, Nature Science Prize of Educational Ministry of China in 2007.