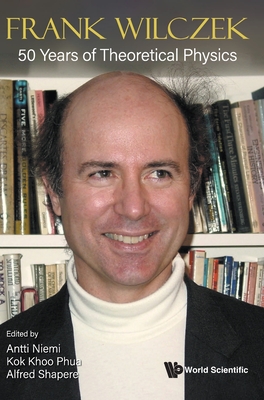 
Not On Our Shelves—Ships in 1-5 Days
(This book cannot be returned.)
Frank Wilczek is one of the foremost theoretical physicists of the past half-century. He has made several fundamental contributions that shape our understanding of high energy physics, cosmology, condensed matter physics, and statistical physics. In all these fields his many discoveries continue to play a key role in shaping the direction of modern theoretical physics.Among Wilczek's major achievements is the discovery of asymptotic freedom, which predicts and explains the ultraviolet behavior of non-abelian gauge theories. The axion, which he co-discovered and named, has emerged as the prevalent candidate for explaining the origin of dark matter in the Universe. His invention of color-flavor locking explains chiral symmetry breaking in high density quantum chromodynamics. His introduction of fractional statistics and anyons are pivotal to our understanding of the fractional quantum Hall effect and form the building blocks of topological quantum computing. His invention of the time crystal concept has catalyzed extensive investigations of dynamical phases of physical systems.Frank Wilczek received the 2004 Nobel Prize in Physics for the discovery of asymptotic freedom. He is also the recipient of several Prizes and honorary awards including the MacArthur Fellowship, the Lorentz Medal of the Royal Netherlands Academy of Arts and Sciences, the Lilienfeld Prize of the American Physical Society, the High Energy and Particle Physics Prize of the European Physical Society, and the King Faisal International Prize for Science of the King Faisal Foundation. He is a member of the National Academy of Sciences, American Academy of Arts and Sciences, and the American Philosophical Society. He is also a foreign member of the Royal Netherlands Academy of Arts and Sciences and of the Royal Academy of Sciences in Sweden.He is currently the Herman Feshbach Professor of Physics at MIT Center for Theoretical Physics. He also holds a professorship at Stockholm University, is a Distinguished Professor at Arizona State University, and is the founding director of the Tsung-Dao Lee Institute and Chief Scientist of the Wilczek Quantum Center at Shanghai Jiao Tong University.This volume serves as a tribute to Frank Wilczek's legendary scientific contributions, commemorating his 70th birthday and the first 50 years of his career as a theoretical physicist. The contributors include several of his PhD students, close collaborators, and both past and present colleagues.