Things as They are: Nafs al-Amr and the Metaphysical Foundations of Objective Truth (Paperback) 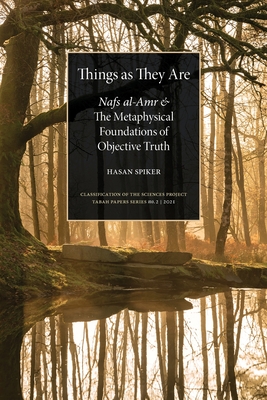 Things as They are: Nafs al-Amr and the Metaphysical Foundations of Objective Truth (Paperback)

In a philosophical idiom that attempts to be intelligible to the reader who is not traditionally trained, this study outlines various dimensions of traditional Islamic 'correspondence' theories of truth. It particularly argues that purely intelligible, 'abstract' concepts, universal natures and general principles objectively apply to the world, against schools of thought that contend that they are subjectively imposed. It is only by discerning the congruity or discordance of these fundamental instruments of general metaphysics with forms of extramental reality, that we are able to avoid the implication that their lack of sensible referents implies our knowledge of the world - which is contingent upon the employment of these instruments - must be ultimately subjective. These intelligible entities, universal natures and general principles can thus only be validated by situating them within an all-encompassing theory of objective reality and truth, in the Islamic tradition nafs al-amr or 'things as they are'. Transcending individual minds and sensible reality, such a theory must be sufficiently broad to account for the ultimate ontological and henological status of such universal and abstract principles and forms.

This study demonstrates that a synthetical approach to the nature of objective reality and truth, drawing on the Avicennan and kalām, and especially Platonic and Akbarian traditions is capable of effectively responding to subjectivist, anti-metaphysical views on the nature of the world and our knowledge of it. It purports to do this in a manner that strengthens the deepest foundations underlying traditional natural theology, illustrating that the physical world of particulars is 'intelligible' (in the sense of 'objectively knowable') exactly because it is a branch of an 'intelligible' (as the contrary of 'sensible'), non-physically instantiated world.