The Betrayal of the Duchess Lib/E: The Scandal That Unmade the Bourbon Monarchy and Made France Modern (Compact Disc) 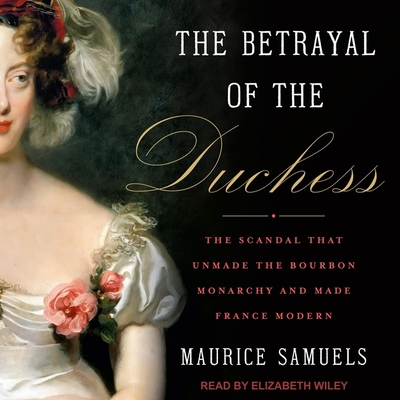 The Betrayal of the Duchess Lib/E: The Scandal That Unmade the Bourbon Monarchy and Made France Modern (Compact Disc)


Special Order—Subject to Availability
Fighting to reclaim the French crown for the Bourbons, the duchesse de Berry faces betrayal at the hands of one of her closest advisors in this dramatic history of power and revolution. The year was 1832, a cholera pandemic raged, and the French royal family was in exile, driven out by yet another revolution. From a drafty Scottish castle, the duchesse de Berry--the mother of the eleven-year-old heir to the throne--hatched a plot to restore the Bourbon dynasty. For months, she commanded a guerilla army and evaded capture by disguising herself as a man. But soon she was betrayed by her trusted advisor, Simon Deutz, the son of France's Chief Rabbi. The betrayal became a cause c l bre for Bourbon loyalists and ignited a firestorm of hate against France's Jews. By blaming an entire people for the actions of a single man, the duchess's supporters set the terms for the century of antisemitism that followed. Brimming with intrigue and lush detail, The Betrayal of the Duchess is the riveting story of a high-spirited woman, the charming but volatile young man who double-crossed her, and the birth of one of the modern world's most deadly forms of hatred.