That Bear Ate My Pants!: Life and Near Death in an Ecuadorian Animal Refuge (Compact Disc) 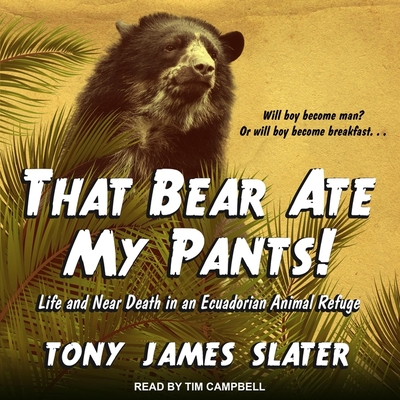 That Bear Ate My Pants!: Life and Near Death in an Ecuadorian Animal Refuge (Compact Disc)


Special Order—Subject to Availability
There comes a time in every man's life when he says to himself, Holy Sh*t I'm about to be eaten by a bear Tony James Slater went to Ecuador, determined to become a man. It never occurred to him that 'or die trying' might be an option . . . The trouble with volunteering in a South American animal refuge is that everything wants a piece of you. And the trouble with being Tony, is that most of them got one. Just how do you 'look after' something that's trying its damnedest to kill you and eat you? And how do you find love when you a) don't speak the language, and b) are constantly covered in excrement and entrails? If only he'd had some relevant experience. Other than owning a pet rabbit when he was nine. And if only he'd bought some travel insurance . . . That Bear Ate My Pants is the hilarious tale of one man's quest to better himself. Whether losing a machete fight with a tree, picking dead tarantulas out of a tank of live ones or sewing the head back on to a partially decapitated crocodile, Tony's misadventures are ridiculous, unbelievable and always entertaining. Long before Sky One got involved, there were already plenty of Idiots Abroad. This is the story of one of them . . . This book is now the first in a series, following Tony's adventures through the UK and Thailand in Don't Need The Whole Dog , and around Australia in Kamikaze Kangaroos They can be read separately or together just as easily.