Nanny for the SEALs (Paperback) 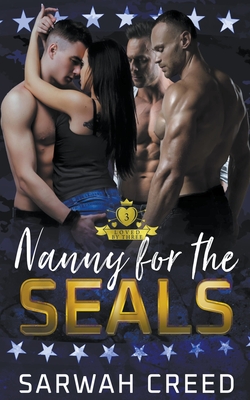 Nanny for the SEALs (Paperback)

Three SEALs need a nanny for their twins... and someone to satisfy their hot-as-sin bodies, too.

I moved cross-country to be with my ex, and one night I followed him, suspecting he was cheating on me. He ended up going to the strip club, Ranchy High.

I had to find a way to get in, so when the bouncer asked if I was the nanny, I lied.

I found out that my ex was cheating and stealing from others. Distressed and distraught, I found myself in the Jeep with a driver, with not only one kid, but two. Their driver took me to their penthouse, which was on the other side of town.

I soon found out that their dads were hot triplets--Stan, Rick, and Pete.

They told me that I did a good job and hired me on the spot. The three hot-as-sin SEALs were triplets, but they're different in every way. Rick, with his seductive and commanding emerald eyes, made me want to surrender to him. Pete was the fun one, the kind who loved to keep entertaining me all night long. Stan was the shy one, the virgin I had to set free from his anxieties.

I found a new lease on life, one that I'd never dreamed of having until I moved in. No more did I have a man making all my anxieties go into overtime.

My world could turn upside down because everything was going right, but it could go wrong if they found out my secret. The lie in which I'd been holding on to, could be revealed, and I would end up losing a lot more than the new home I've found--I could end up losing my heart, too.