contribution to the science of hadith By Shaikh Abdul Haques (Paperback) 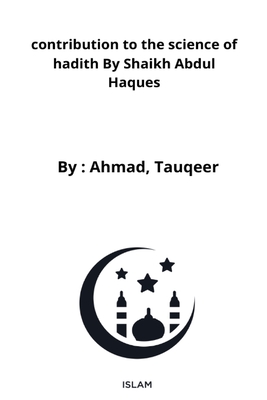 contribution to the science of hadith By Shaikh Abdul Haques (Paperback)

The trading and cultural ties between the Arabs and the Indian sub-continents, dates way back to the pre-Islamic era. Introduction of Islam in India was in the early eighth century, as it was the Umayyad Caliph al- Walid reign on the advice of his viezir Hajjaj bin Yusuf Thaqafi, in which the mighty Muslim army was at war front on three principle locations. 1) The army under the command of Musa Ibn Nusayr along with Tariq bin Ziyad had conquered North Africa and Spain, 2) the muslim army under the command of Qutaybah Ibn Muslim, and annexed Persia and most of Central Asian Land, 3) the said discussion; with the arrival of the Arabs in Sindh. The commander of the Muslim army, Muhammad bin Qasim, conquered this part in the year 711 AD, and annexed it after defeating the ruler of Sindh Dahir. The conquest of Sindh marked the eastern most extent of the territorial control. According to the 'Chachnama', the local chronicle from Sindh, narrates the event of the conquest of Sindh, in which, we found that, the initial naval expedition was the failure, but the Arabs constantly exercised their power, and upto 724 AD, were abl-e to established direct rule. Similarly the intellectual awakening of the Islamic sciences also came along with these peoples,