The Two Gentlemen of Verona (Paperback) 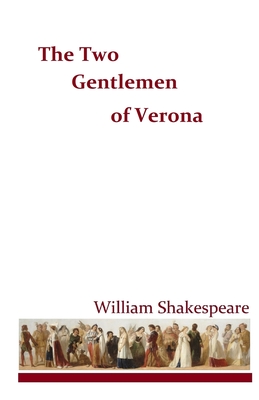 The Two Gentlemen of Verona (Paperback)

The Two Gentlemen of Verona is a comedy by William Shakespeare, believed to have been written between 1589 and 1593. It is considered by some to be Shakespeare's first play, and is often seen as showing his first tentative steps in laying out some of the themes and motifs with which he would later deal in more detail for example, it is the first of his plays in which a heroine dresses as a boy. The play deals with the themes of friendship and infidelity, the conflict between friendship and love, and the foolish behaviour of people in love. The highlight of the play is considered by some to be Launce, the clownish servant of Proteus, and his dog Crab, to whom "the most scene-stealing non-speaking role in the canon" has been attributed.Two Gentlemen is often regarded as one of Shakespeare's weakest plays. It has the smallest named cast of any play by Shakespeare. As the play begins, Valentine is preparing to leave Verona for Milan so as to broaden his horizons. He begs his best friend, Proteus, to come with him, but Proteus is in love with Julia, and refuses to leave. Disappointed, Valentine bids Proteus farewell and goes on alone. Meanwhile, Julia is discussing Proteus with her maid, Lucetta, who tells Julia that she thinks Proteus is fond of her. Julia, however, acts coyly, embarrassed to admit that she likes him. Lucetta then produces a letter she will not say who gave it to her, but teases Julia that it was Valentine's servant, Speed, who brought it from Proteus. Julia, still unwilling to reveal her love in front of Lucetta, angrily tears up the letter. She sends Lucetta away, but then, realising her own rashness, she picks up the fragments of the letter and kisses them, trying to piece them back together.Meanwhile, Proteus' father has decided that Proteus should travel to Milan and join Valentine. He orders that Proteus must leave the next day, prompting a tearful farewell with Julia, to whom Proteus swears eternal love. The two exchange rings and vows and Proteus promises to return as soon as he can. In Milan, Proteus finds Valentine in love with the Duke's daughter, Silvia. Despite being in love with Julia, Proteus falls instantly in love with Silvia and vows to win her. Unaware of Proteus' feelings, Valentine tells him the Duke wants Silvia to marry the foppish but wealthy Thurio, against her wishes. Because the Duke suspects that his daughter and Valentine are in love, he locks her nightly in a tower, to which he keeps the only key. However, Valentine tells Proteus that he plans to free her by means of a corded ladder, and together, they will elope. Proteus immediately informs the Duke, who subsequently captures and banishes Valentine. While wandering outside Milan, Valentine runs afoul of a band of outlaws, who claim they are also exiled gentlemen. Valentine lies, saying he was banished for killing a man in a fair fight, and the outlaws elect him their leader.