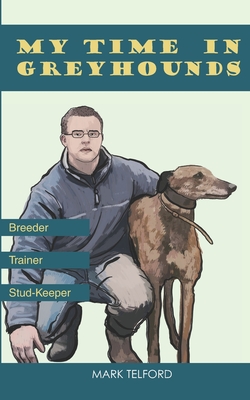 
Special Order—Subject to Availability
(This book cannot be returned.)
Ever fancied being a greyhound breeder or trainer? This informative and brutally honest book shows exactly what it's like, the dogs, the bloodlines, the work, the owners, the joys, successes, training, breeding, the trials, tribulations, problems, etc. Full of factual stories and really gives the true inside story of what it's like to earn a living from Greyhounds in Ireland.
In mark's own words below: I was basically a breeder, trainer, rearer and Stud-keeper. I didn't start with huge sums of money or hundreds of acres of land, but built it up as I could. I stood Trendy l igh, brother of Brett Lee at stud, along with Toll Security and Elles Dominator. I was in the Midlands in Ireland, not the best area geographically to earn a living from greyhounds as Munster and the counties of Cork, Limerick, Kerry, Tipperary and Kilkenny tend to be the best areas to be located. But I persevered and made it work, really for as long as I wanted to. I broke the track record for 600 yards on the old grass track in Mullingar that had stood for 34 years. The dog was later sold and was later hot favourite for the TV trophy in UK, but found trouble in the final. This dog's name was Long Island Lad and he was a very fast dog that had been poorly owner trained before he came to me. He wasn't the fastest dog I trained though, but was very genuine if not the cleverest of trackers. I always had more interest in breeding than training, but the two go hand in hand, and to make a living in Ireland you need to do a bit of everything, breeding, rearing, schooling, training, and of course racing. The racing on top of everything else was hard as you might not get back to the kennels afterward until near midnight. Then the dog would have to be fed and I'd turn the adult dogs out to empty before heading home. Then it would all start again at 7 the next morning. This book is my 100% honest account of over 20 years of working with greyhounds. I don't pull any punches and tell everything exactly as it happened and I saw it.
A hugely entertaining memoir told in an easy-going narrative style.
Mark was a greyhound breeder, trainer, rearer and Stud-keeper in Ireland for many years. He handled Brett Lee's brother Trendy Leigh at stud and also Toll Security and Elles Dominator, amongst others. He considers himself more a breeder than a trainer, but in Ireland, you need to do everything to make it pay. He trained a dog that broke the TR at Mullingar over 600 yards. A man of strong opinions, he's not afraid to speak out about any greyhound issue. He's not interested in political correctness, unlike many big-name trainers who put pen to paper.