Tax Man: How Homo sapiens took 10% of everything to conquer the world (Paperback) 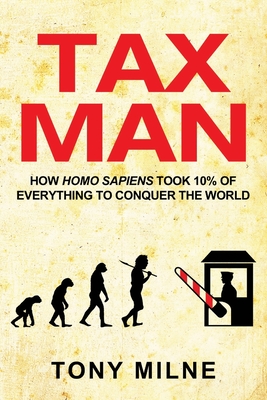 Tax Man: How Homo sapiens took 10% of everything to conquer the world (Paperback)


Not On Our Shelves—Ships in 1-5 Days
(This book cannot be returned.)
Tax Man explains how a human population of more than seven billion is possible. Most mammals follow a violent instinct when meeting strange same-sex members of their own species, restricting their population to a few million. Humans, uniquely, co-operate. This adaptation derives from a simple genetic mutation. It inhibits our fight/flight/freeze instinct and instead operates a 10% tax, which is far more effective in increasing our total offspring. Homo sapiens with the tax gene mutation competed with other Homo species, and used their tax-derived co-operation to outperform even the most intelligent sapiens subspecies. It seems a misnomer to call ourselves sapiens. A more accurate term would be Homo acquiescans, for it is in our ability to acquiesce to the theft of our wealth that lies our demographic success.All civilisation stems from, and cannot exist without, this simple genetic change. Our ability to avoid killing allows us to co-operate in ever-larger groups to hunt, to build, to explore, to fight and to farm. Operating in larger groups requires more complex language and social systems. Taxation led to the development of writing and mathematics, and social engineering like circumcision. Belief cults become religions when they adopt taxation. Complex societies form cities, in which individuals can specialise in trades, creating a division of labour that is far more efficient than personal autarky. All these developments help tax societies to grow faster, to produce aggressive young men in larger numbers than other societies.Groups with this mutant tax gene who adopted taxation conquered and occupied most of the world. The story of those men is Tax Man.