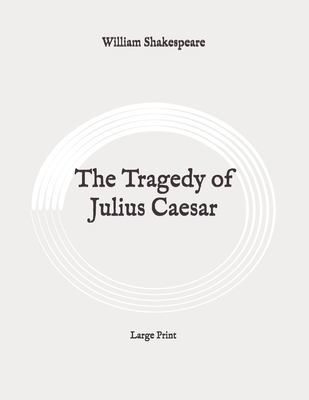 
Special Order—Subject to Availability
(This book cannot be returned.)
In this striking tragedy of political conflict, Shakespeare turns to the ancient Roman world and to the famous assassination of Julius Caesar by his republican opponents. The play is one of tumultuous rivalry, of prophetic warnings-'Beware the ides of March'-and of moving public oratory-'Friends, Romans, countrymen ' Ironies abound and most of all for Brutus, whose fate it is to learn that his idealistic motives for joining the conspiracy against a would-be dictator are not enough to sustain the movement once Caesar is dead.Jealous conspirators convince Caesar's friend Brutus to join their assassination plot against Caesar. To stop Caesar from gaining too much power, Brutus and the conspirators kill him on the Ides of March. Mark Antony drives the conspirators out of Rome and fights them in a battle. Brutus and his friend Cassius lose and kill themselves, leaving Antony to rule in Rome. SCENE IRome. A street. Enter FLAVIUS, MARULLUS, and certain Commoners]FLAVIUSHence home, you idle creatures get you home: Is this a holiday? what know you not, Being mechanical, you ought not walk Upon a labouring day without the sign Of your profession? Speak, what trade art thou?First CommonerWhy, sir, a carpenter.MARULLUSWhere is thy leather apron and thy rule? What dost thou with thy best apparel on? You, sir, what trade are you?Second CommonerTruly, sir, in respect of a fine workman, I am but, as you would say, a cobbler.MARULLUSBut what trade art thou? answer me directly.Second CommonerA trade, sir, that, I hope, I may use with a safe conscience; which is, indeed, sir, a mender of bad soles.MARULLUSWhat trade, thou knave? thou naughty knave, what trade?Second CommonerNay, I beseech you, sir, be not out with me: yet, if you be out, sir, I can mend you.MARULLUSWhat meanest thou by that? mend me, thou saucy fellow Second CommonerWhy, sir, cobble you.FLAVIUSThou art a cobbler, art thou?Second CommonerTruly, sir, all that I live by is with the awl: I meddle with no tradesman's matters, nor women's matters, but with awl. I am, indeed, sir, a surgeon to old shoes; when they are in great danger, I recover them. As proper men as ever trod upon neat's leather have gone upon my handiwork.FLAVIUSBut wherefore art not in thy shop today? Why dost thou lead these men about the streets?Second CommonerTruly, sir, to wear out their shoes, to get myself into more work. But, indeed, sir, we make holiday, to see Caesar and to rejoice in his triumph.MARULLUSWherefore rejoice? What conquest brings he home? What tributaries follow him to Rome, To grace in captive bonds his chariot-wheels? You blocks, you stones, you worse than senseless things O you hard hearts, you cruel men of Rome, Knew you not Pompey? Many a time and oft Have you climb'd up to walls and battlements, To towers and windows, yea, to chimney-tops, Your infants in your arms, and there have sat The livelong day, with patient expectation, To see great Pompey pass the streets of Rome: And when you saw his chariot but appear, Have you not made an universal shout, That Tiber trembled underneath her banks, To hear the replication of your sounds Made in her concave shores? And do you now put on your best attire? And do you now cull out a holiday? And do you now strew flowers in his way That comes in triumph over Pompey's blood? Be gone Run to your houses, fall upon your knees, Pray to the gods to intermit the plague That needs must light on this ingratitude.