Parallels in the Torah (Paperback) 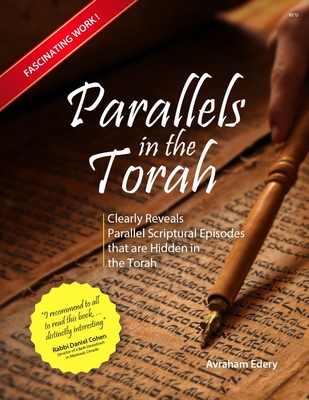 Parallels in the Torah (Paperback)

"Parallels in the Torah" is an original and fascinating book that clearly reveals that apparently unconnected episodes in the Torah are actually inherently connected in a meaningful way. Below is a brief example:

WHAT'S THE CONNECTION BETWEEN THE AKEIDAH YITZHAK & MATAN TORAH EPISODES?

Did you know that these two episodes share over twenty significant matches including words and actions in the same chronological order? It is almost impossible that this is by chance, but rather the reality is that these two apparently unconnected episodes are inherently and meaningfully connected Below is explained just two of the parallels described in Ch.9.

12) Both episodes describe a very similar pattern of how Avraham & Moshe and associated persons approached the mountains to perform the Akedah/receive the Torah:

That is, both episodes started with one group of persons which then broke into several groups with one group staying at a distance from the mountain and another group (or person) then going up the mountain- with the person that will go up the mountain giving orders to the others to wait for them there, that they will return to them. You will note the very similar Hebrew matching language in bold as well as matching actions by reviewing the parallels below.

a) The Akeidah episode:

"On the third day Avraham raised his eyes and he saw the place from afar (מֵרָחֹק). And Avraham said to his young men " שְׁבוּ-לָכֶם פֹּה (wait here by yourselves) with the donkey while I and the lad will go up to here, we will worship, we will return to you ( וְנָשׁוּבָה אֲלֵיכֶם.)"

b) The Matan Torah episode:

When Moshe went up Mount Sinai to get the "tablets of stone and the Torah" (Shemot 24-12):

"Moshe arose, and Joshua his servant; and Moshe ascended to the Mountain of G-d. And to the elders he said, wait for us here until we return to you ( שְׁבוּ-לָנוּ בָזֶה, עַד אֲשֶׁר-נָשׁוּב אֲלֵיכֶם ). Behold Aaron and Hur are here with you..." (Shemot 24 -13).

13) In addition, the same word מֵרָחֹק (from a distance) is used with respect to approaching the mountains - whereby the persons with Avraham and Moshe both wait at that distance (מֵרָחֹק) until Avraham and Moshe return to them.

a) The Akeidah Yitzhak episode reads: "On the third day Avraham raised his eyes and he saw the place from a distance (מֵרָחֹק )." That is where they were asked to wait.

b) In (Shemot 20-18) we see (just like in the Akeidah episode) that the people stood at a distance (מֵרָחֹק) while Moshe went up the mountain himself as per: "the people stood from a distance ( מֵרָחֹק ) - and he approached the fog where G-d was." They waited for him there.

This is just like in the Akeidah episode where Avraham's servants stayed at the bottom of the mountain waiting when Avraham went up with Isaac.

Order a print copy to finish reading this chapter & to enjoy other chapters. PDF copy at ParallelsInTheTorah.com. Share with others. Some other Parallel Episodes discussed are:

The Mabul (flood) & the Yam Suf

Avraham & Rivka - Say Little But Do Much

Sodom & Yehuda - Killing the Good With The Innocent