The Bankruptcy of Uncle Sam: Zeroing In On Bipartisan Fiscal Failure (Paperback) 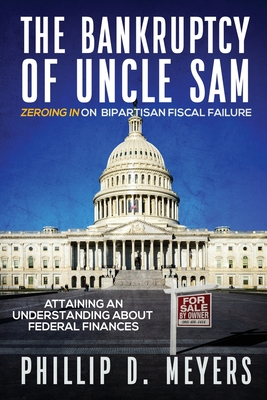 The Bankruptcy of Uncle Sam: Zeroing In On Bipartisan Fiscal Failure (Paperback)

A dangerous game is played when politicians become reliant on providing their constituents with economic windfalls disguised as spending to purchase votes. Stimulating the Nation's insolvency by weakening the financial foundation of our democracy defies prudent economic policy.

Federal spending deficits for the fiscal years 2019, 2020 and 2021 exceeded $6.9 trillion dollars. Congress has already approved spending in excess of revenue collections of $3.1 trillion for the fiscal year ending in 2022 with the likelihood of adding another $2 trillion for the unfunded infrastructure plan. Increasing federal public debt by $11 trillion or more in four years is equivalent to spending and borrowing $84,000 for every household in America in excess of all tax collections. Most households would take the cash instead of what is behind the political curtain if Congress were to host a game show.

There's no need to wonder what will happen when the proverbial 'can" filled with unkept political promises, excess spending, and fiscal irresponsibility can no longer be kicked to future generations of Americans. This book will reveal the truth --The can cannot be kicked much further because the seams have been split from overfilling the now immobile vessel with almost $30 trillion of treasury IOU's.

The reader will understand how Congress has disappointed most citizens of the United States by adopting reckless and irresponsible fiscal policies. A journey through the pages will result in gaining meaningful knowledge and historical insight relating to

- The spending deficit, federal debt and the precarious financial position of the Nation

- Understanding where 100% of federal revenue is derived from

Learning that neither the Congressional or White House Budget Office satisfies the need for federal revenue and spending accountability results in the understanding that few people in Washington would pass scrutiny for how taxpayers dollars are spent. The certainty of the crumbling of our Nation's financial foundation does not require any prophesy from Nostradamus to understand the need to promptly reverse the federal spending excesses before it is too late.

Mr. Meyers is a CPA who specialized in taxation, private company financing and litigation support services. During the course of his career, he was co-founder, CEO & Chairman of a large multi-unit/multi-state service organization. After retirement, Mr. Meyers has devoted his time to investing and consulting with many development stage companies and maintains an active role in managing commercial property holdings. His family resides in Paradise Valley, Arizona and San Diego, California.